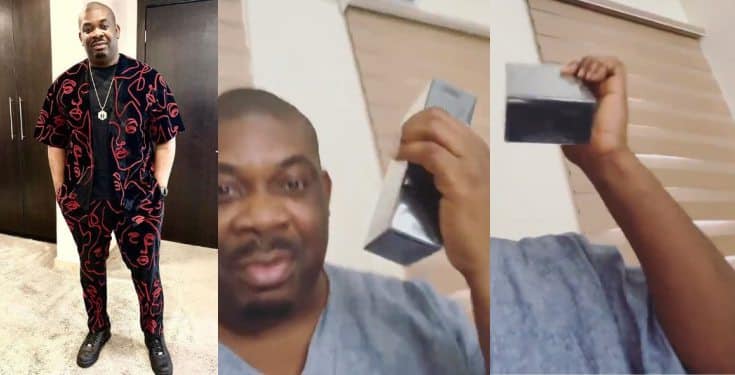 Music mogul, Don Jazzy is definitely now a proud owner of the latest iPhone which worth ₦600,000.
This is coming just a day after controversial actress Tonto Dikeh bought the phone and right now Mavin boss, Don Jazzy has joined the clique by getting the expensive phone.
Don Jazzy swiftly took to his Instagram story to show off his newly purchased Midnight-Green iPhone 11 Pro Max 512GB to his followers.
He used the medium to reveal he was not able to get the phone at the time of its release due to the color he wanted.
He, however, was able to get it with the help of a certain vendor.

‘They Are All Intellectually Poor’ – Daddy Freeze Blasts BBNaija Housemates

BBNaija: ‘Met Police expecting me back at work’ – Khafi

Tiwa Savage speaks on Teebillz and her worse relationship regrets

No going back on social media regulation – Lai Mohammed